Guests of the 24th edition of the Fondation du CHU de Québec’s Bal des Grands romantiques, presented by Québecor, celebrated love and good health last Friday at Vidéotron Center. Under honorary event chairman Jean-François Chalifoux, CEO of SSQ Assurance, the Fondation’s marquee event saw 750 people from the business community raise $ 610,000 to help further the specialized care offered at CHU de Québec-Université Laval. Hosted by Mitsou Gélinas, the Bal’s 24th edition shattered records not only by raising $ 105,000 more than last year, but also in the number of guests in attendance and the number of sponsors that supported the event. 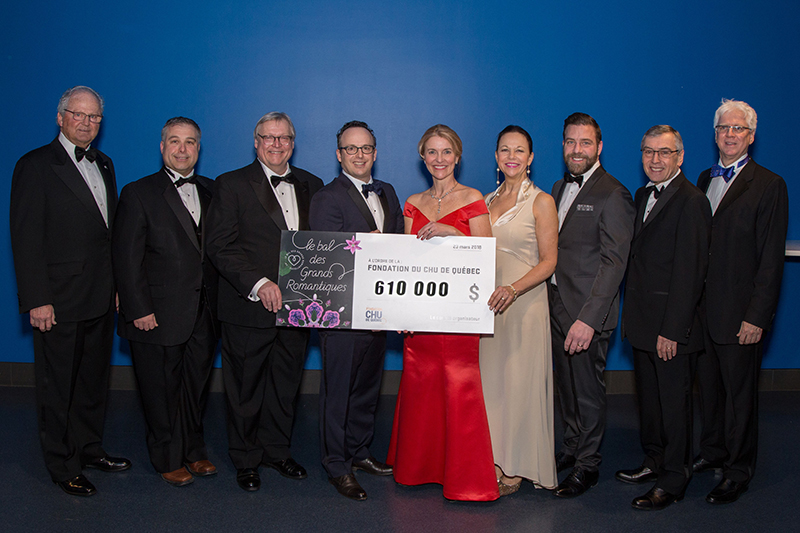 A prestigious event for a major foundation

The Fondation du CHU de Québec plays an innovative role on behalf of the CHU de Québec-Université Laval, the largest specialized care institution of its kind in Quebec, in terms of the humanization of care, the furthering of research, in teaching and in the purchase of leading-edge technology medical equipment. It makes 350 projects per year possible in the centre’s 5 hospitals. The funds raised at the Bal des Grands romantiques enable the Fondation to pursue its mission. Over the course of the evening, guests saw the difference the Fondation makes every day in the lives of patients and their families in a video filled with moving testimonials (available on the Fondation’s Facebook page). "It is vital that we continue our efforts on behalf of those that have benefited, are benefiting and will one day benefit from care. The Fondation’s impact is enormous and it is even bigger thanks to the donations, participants and sponsors of the Bal. It lets us reinvent the hospital and serve society better by supporting the cause of care, " says Marie-Claude Paré, Fondation du CHU de Québec President and CEO.

The Bal’s honorary chairman, Jean-François Chalifoux, CEO of SSQ Assurance, demonstrated his commitment and played an important role in the event’s success. " As a cause, health is very important to us at SSQ and for myself as well. That’s why we decided to support the Fondation du CHU de Québec, so it can pursue its mission in support of the health and well-being of people in the Quebec City area and eastern Quebec. I am very proud to have contributed to this record-breaking edition of the Bal."

In addition, the Fondation du CHU de Québec has recently received a great honour. This past February, the 23rd edition of the Bal was named best charitable event of 2017 for Ontario and Quebec by the Canadian Event Industry Awards. What’s more, advertising agency lg2, collaborators with the Fondation team on the Bal, won three awards of merit from the Advertising and Design Club of Canada for its Bal work. And finally, on March 21, the Canadian Event Industry Awards named the Bal des Grands romantiques the Canadian fundraising event of 2017! President of the Bal organizing committee Patrice Beauchemin, architect partner at Groupe A architects, lauded these distinctions: " These awards illustrate the growing awareness of the Bal. For the organizing committee, it is a wonderful reward indeed!  "Fondation CEO Marie-Claude Paré echoed his enthusiasm: "These distinctions demonstrate the extent to which excellence and innovation make up part of the Fondation’s vision for the future. We are relentlessly pushing the limits and are proud to do so! The idea of creating a national event is becoming more and more of a reality today."

The evening unfolded in the presence of Pierre Karl Péladeau, Québecor President and CEO, Dr Gaétan Barrette, Minister of Health and Social Services, Sébastien Proulx, Minister of Education, Leisure and Sports and Minister Responsible for the National Capital Region, Robert Poëti, Minister for Integrity in Public Procurement and for Information Resources, and Véronyque Tremblay, Minister of Transport.

Worthy of its rich tradition, the Bal is preceded each year by the President’s Circle Breakfast at the National Assembly’s Le Parlementaire restaurant. The region’s major players came together for an occasion that combines business, pleasure and philanthropy. This year about 40 people took part including Robert Poëti, Minister for Integrity in Public Procurement and for Information Resources.

Partners in love with life

close and return to the site